Westminster Abbey is a grand, gothic edifice, and I found its architecture, music, and sculpture a garden of empyrean delights, the music most of all. 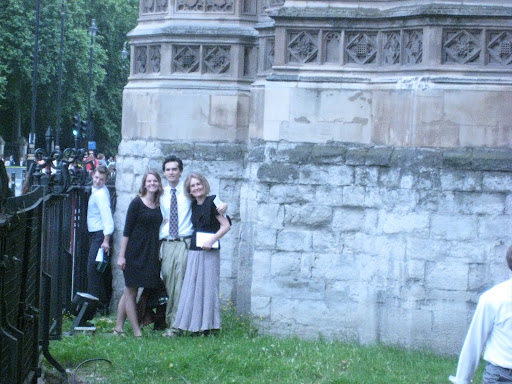 We were obliged to leave the service before it was complete, shortly into the imparting of the sacraments.  Given our position, we thought it least obtrusive to make our exit through the nearest egress (at the south transept).  We got out of the building alright, but found that the gate beyond was locked, so we took advantage of a narrow slot between the abbey wall and the iron fence about it.  Being of narrow frame every one of us, we slipped from the locked yard into an adjacent one and exited through the usual gate.  In the photo, you can see Brad turned sideways to negotiate the passage (which would not have been so narrow, except for a bent iron bar which extended from the stone wall toward the gate.)

The singers were tightly on key and raised harmonies that infused life into the brain and magic into the blood.  The all-stone construction created a strong reverb to give the music a very ethereal, haunting effect.  Remarkably, I did not find that the effect to diminish the experience but rather found it highly pleasing.

My impression of the Westminster choristers contrasts strongly with my experience with the Mormon Tabernacle Choir in the LDS Conference Center, which also makes use of a strong reverb; the latter has always sounds like a loud, atonal whisper, which always makes the music merely less distinct to my ears, cloaking merit and error alike.  Unpleasant to my taste for as long as I’ve been alive.

The rest of my party preferred the music we heard later that day at St. Martin in the Field church.  I can’t say why.

We had the good fortune to be seated in Poet’s corner.  A bust of William Blake occupied a commanding position partway up a load-bearing column ahead of us.  During our exit, I observed the resting places of the corporeal remains of Geoffrey Chaucer and Edmund Spenser.  Against the west wall were an abundance of masterful likenesses and scenes in relief.  Ah, to have had longer there. 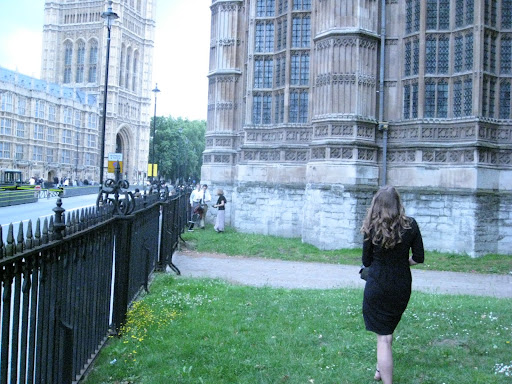 Gothic architecture is notable not only for it’s ornament, sharp angles, and aspiring height (and concomitant flying buttresses) but for the light interiors (permitted by grand and often ornamental windows).  Or so the art history texts instructed me.  Because I was expecting light interiors, I found the inside of gothic constructions suprisingly dark.  I suppose they might have been marginally brighter than the Norman age constructions we visited, but not noteably so.  (My recollection of York Minster is that it was considerably brighter than Westminster.)  What was noteable (to me) is that there was electric lighting in the church, though dim and unobtrusive.

All to the better, really; the darkness contributed to a really priceless atmosphere of wonder.

The photograph here gives you an idea of the scale of the building and the multitude of windows.  (That’s our 6’+ bodies standing on the left.)

The cloth gave a really fine sermon about forgiveness.  It was really well delivered and entailed a truly interesting history.  Nevertheless, it struck me as rather humanist, which I suppose is not uncommon in today’s Christian churches, that is, something along the lines of, “We must and can do good and difficult things,” but without mention of relying on God for his saving or strengthening power.

In contrast, the liturgies contained language of religion in addition to philosophy.