If you’re native to an English-speaking country, you’ve heard of the Globe Theatre.  Two things all U.S. high school grads know are that Eli Whitney invented the cotton gin, and Shakespeare’s theatre was the Globe. 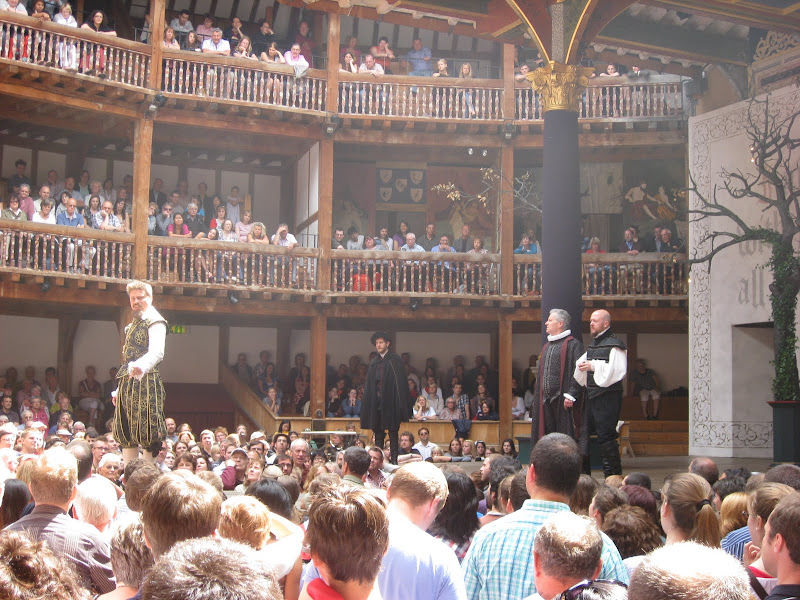 My review of the Globe Theatre 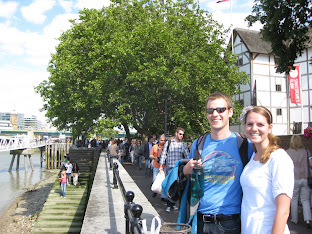 I had seen a drawing of the Globe in one of my high school English classrooms, and I didn’t think much of it, but seeing it in person, I was genuinely impressed (and surprised to find myself so), impressed at the splendour of the stage and the capacity of the house.  It was a good deal bigger than I expected, and I could instantly see that views of the stage were much better than I had imagined when viewing the old drawing in high school.

One hopes that the people in 1599 were shorter than they are now, though, because there was not much leg room on the benches on the lower story.  Mum, Luther, and I had seats on stage left.  Dad, Sav, and Brad had seats in the pit, which is rather like the standing room around the stage at a rock concert.

Alas, photos were not permitted the theatre-goers themselves, but there was a professional photographer going about and snapping pics at his pleasure through the performance. (I can’t guess why they didn’t allow photos.  It’s not like people would have had flashes going off since the theatre is open-air, and the performance took place at 2:00.)

The show we caught was Anne Boleyn.  My review of the show follows, but first: history.

The history of the Globe Theatre

Prior to my England trip, I listened to an audio book A Year in the Life of William Shakespeare.  Among other matters, the book described the history of the Globe Theatre, which I’ll attempt to reconstruct:

The Globe Theatre’s origins lie in another theatre which lay on the north side of the Thames, owned by a certain Mr Burbage.  The theatre was in time inherited by Burbage’s two sons, and it was under their hand that the lease came due.  For a reason I can’t recall they determined to remove to another location.

The Burbage brothers didn’t have the money to strike out in this manner, so they invited certain other of the Theatre’s actors (including the talented William Shakespeare) to buy in and become co-owners.  The buy-in was quite steep for the actors, but becoming co-owners would increase their earning power above the not-much-more-than-subsistence, which it was at the time.

The four invitees did buy in, but there was a complication: the Theatre was owned by Burbage Sr, but the land on which it stood was actually leased.  That may not seem like a problem, but the question of whether or not the Burbage brothers had a right to the building was significant that the six actors carried swords and came in the night in the dead of winter to dismantle the Theatre and move the timbers and pegs on their own.

After the turn of the year, they rebuilt the Theatre on the other side of the Thames, specifically Bankside, Southwark.  The new theatre, named the Globe, was assembled in the very image of the old one.

My review of Anne Boleyn

I was rather disappointed.  There.  It was a good deal better than most of the performances I’ve seen whose dialogue is Elizabethan English, but it was, notwithstanding, rather vulgar (in both senses of the word).

I find it a regrettable commonplace that people find it the height of wit to insert crass language and lewdness into supposedly high-brow entertainment.  Seriously?  This is what elicits waves of laughter from audiences?  Even audiences who eschew the popular and seek out something less accessible?