Our depature from London took us through King’s Cross station.  Some one or other of us had heard that the city had installed a false “Platform 9 3/4” in tribute to the Harry Potter books, so we sought out the photo opportunity, but be warned, it was a disappointment.

It’s only a print of a brick wall with the latter end of a bifurcated luggage cart bolted against it.  To enhance the indignity, there’s a sign overhead reading “Platform 9 3/4″… I guess that’s for the benefit of people who have read lots of books in which characters push luggage carts through red brick walls.

Unfortunately, the print is not very broad or tall, so there is no angle from which you can take a snapshot for a legitimate-looking photograph. What’s more, the lustre of the glossy print, coupled with the light from different angles, means that you’ll see glare on your snap, no matter where you stand to take the photo.

The nicest thing about the photo experience for me was that it’s outside of the station, so people who go out of their way to get the photo don’t have to pay for a train ticket to reach the site. 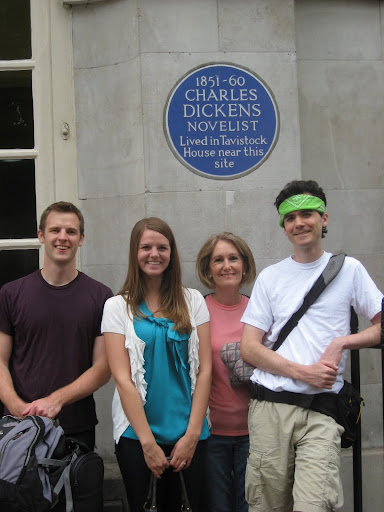 It turned out that King’s Cross station was not the station closest to the Hertz car rental, so we were obliged to do some walking, but on our way, we passed a house which had served as residence to Charles Dickens, so we stopped for a photo.

We knew the car would be smaller than our habit; we’ve driven in other countries before. Still, our expectations were surpassed.

The car was to hold 6 of us and our (minimal) luggage, but to our unhappy surprise, the car would only accommodate 6 of us by folding a seat up in the very trunk (boot) of the car. Gah! So Mum had her knees tucked up to her chest, and our luggage space was but half of the minimal capacity we had expected.

…we didn’t spend very long in any one place. From here on, we explored mostly family history sites and LDS church history sites in England.  Look forward to reading about our experiences in the following (and others):

And then on to Scotland.